My husband of 48 years has early on set Alzheimer’s. I’m tired of saying that. Early, late, doesn’t matter. My 68 year old husband has Alzheimer’s. He was diagnosed 2 years ago, but has probably had the condition (disease?) for several years. What is still,  still surprising to me,  is how fast this is progressing.

I planned a trip for us to Florida, knowing this would probably be the last one that he would enjoy. His brother and wife and his sister and her husband own homes within 30 miles of our destination. We would visit with them, lie on the beach, work on our tans, drink fruity drinks. It’s Florida! What’s not to love? So, we boarded the dogs, got on a plane and 2 hours later, we (along with my sister) are in the Sunshine State. Ready to enjoy a much needed vacation!    N O T !

What I didn’t realize then, is that when you take someone, like Doug, out of their known environment (home) and displace the thing they cling to (his dog),  they become manic. He would lie next to me in bed and pat and stroke my arm,  thinking I was our dog, Max, who sleeps with him at home. At least twice a night, he would get up, out of bed and go tearing through the suitcases and would cry, ” I have to go! I have to get my dog!” Days weren’t much better. He couldn’t walk on the beach, because his balance is off. He could only lie on the beach for 15 minutes at a time before he got antsy. Fidgeting is a real thing for him. He was okay around his family; friendly, if somewhat withdrawn. Most days, to deal with his anxiety,  I would put him in the car and just drive.

It was a long week. I wish we had not gone, but I learned a lot. I am only working part time and will retire next month. Doug needs me, full time. I have hidden his car keys, so he has started wandering. He doesn’t like to bathe and eats very little. But, as long as I am with him, he goes where I go, and does what I say. So, this is our new reality. 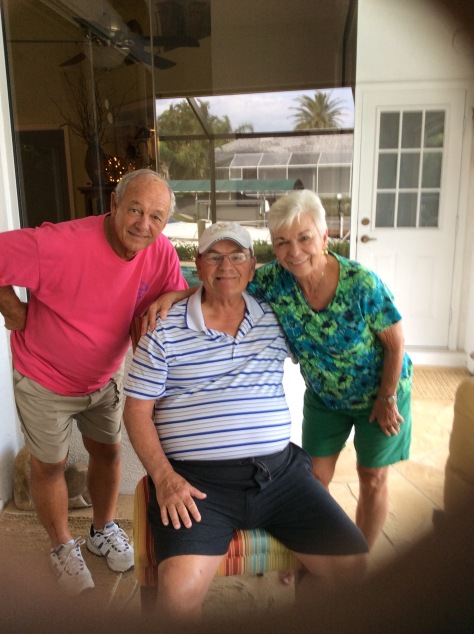 My View From Here